Spring’s heart is in bloom, shoots up through the stony ground… 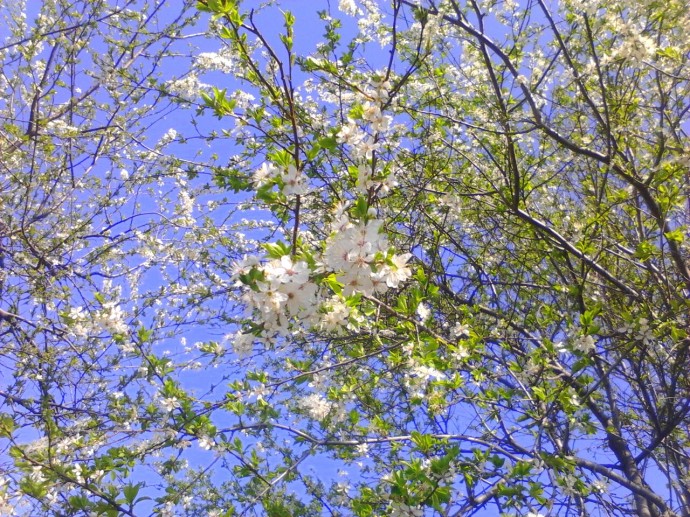 A small ancient village in South-Eastern Poland, Zalipie, is home to a charming tradition and definitely one of the country’s top tourist attractions. Not because it has five-stars hotels or massive glass buildings, but on the contrary, due to its small wooden houses, which are painted in the most vibrant colors.

This lovely tradition started with more than a century ago, when every single female resident in Zalipie begun to paint her home with floral motives. Over the years, the flower patterns became gradually more and more sophisticated and the village literally bloomed! Currently, Zalipie is considered one of the most picturesque villages in Poland.

Although no one is completely sure why this tradition began, it seems the reason was the smoke from stoves escaped through little more than a hole in the ceiling of the house. Women would paint over the spots of soot with whitewash. Yet the spots would still be partially visible and it is believed that the women, in order for their house to appear immaculate for religious festivals, took to covering the remnants of soot stains with paintings of flowers. The spreading of this idea may have happened spontaneously throughout the village. Yet I like the idea of a lone woman looking around her kitchen and suddenly having her “Eureka!” moment. And since they didn’t have professionally made equipment, they manufactured the brushes themselves, using hair from the tails of their cows. As or the paint itself, the women used fat from the dumplings they made. Very important is that each year, all the women had to repaint their charming drawings. And they did so, after the Feast of Corpus Christi, when they weren’t so busy with their farm work. Once modern cooking and better ventilation came in to practice, these cover-ups were no longer necessary.

In time, this joyfully and unique habit was passed on from one generation to another. Moreover, women found inspiration in nature and local folklore, so their paintings became both larger and more colorful. Over time, the practice has spread beyond the walls of the cottages too – it seems in Zalipie any immovable object is potentially the site for a florescent flourish. Nothing, it seems, escapes their attention. The chicken coups are painted. The village bridge is painted. The bins are painted. The dog’s cages are painted. Old fountains are painted. Not to mention fences, windows and interior walls. It’s a real delight! 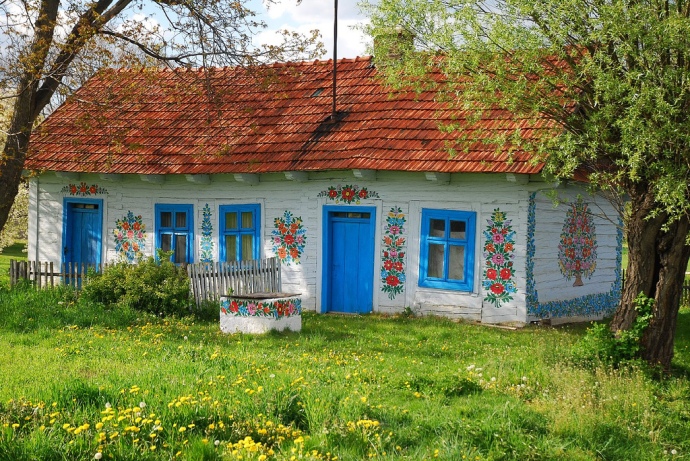 One woman in particular retained and developed the tradition. Felicja Curyłowa (1904 – 1974) became so obsessed with the floral decorations that she covered almost every possible surface of her three-bedroomed cottage with her ornate adornments. Unsurprisingly her beautiful home has been turned into a museum, to be preserved as the epitome of this wonderful folk art. Yet although Curyłowa’s house is beautifully maintained, the art was not created with the aim of attracting visitors. Some of it looks a little worn around the edges – yet these pieces, left to their own devices, are often those which look both the most attractive and authentic.

The perfect time to visit Zalipie is spring, as during this season, since 1948, the village hosts an important contest: the Painted Cottage competition or “Malowana Chata”. Its introduction was part of the movement to help the country psychologically recover from the horrors of the Second World War, in which it saw over 17% of Poland’s population perish.

Zalipie is quite well known to Poles yet tourists from further afield are still something of a novelty for the villagers. They are said to be as curious of their visitors as their guests are about the gorgeous painted cottages of Zalipie. So pay them a visit, maybe? Meanwhile, let’s take a virtual tour.

END_OF_DOCUMENT_TOKEN_TO_BE_REPLACED

Beauty comes in all colors: superb photographs of people from around the world 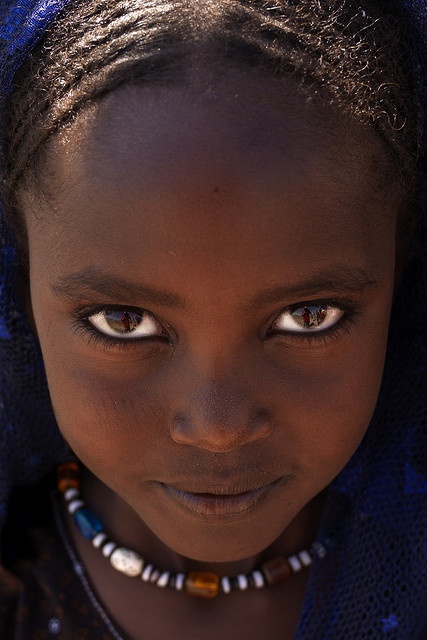 END_OF_DOCUMENT_TOKEN_TO_BE_REPLACED

Well this is one way to walk all over your exes: use them as inspiration for a shoe collection. Artist Sebastian Errazuriz did just that, turning 12 ex-lovers into one wildly imaginative shoe collection.

Errazuriz worked together with Melissa, a shoe company famous for working together with other high-profile designers like Vivienne Westwood and Karl Lagerfeld. While they surely kicked ass, let’s not forget that this probably wouldn’t have been executed to such a degree if it were not for the use of 3D printing. It’s always superb to see art make use of trending technology, there are few relationships I find so symbiotic. The pairing testifies the tech, while also breathes new life into the art. A reminder that sometimes inspiration and ideation can be born out of simply looking to what’s modern (and how that can be exploited).

Each pair is named for one of Errazuriz’s former flames, from “Ice Queen Sophie” to “Heart Breaker Laura” to the “Gold Digger Alison,” and all personify each woman through Errazuriz’s eyes. To add one more emotional layer, the artist wrote small yet-detailed stories about each relationship (note they are NSFW) and how it inevitably ended. Some of the descriptions are beautiful and flattering, while others are not quite as nice. However, they seem like an act of deliberate public self-exposure and sincerity, and I like how this sincerity makes him extremely vulnerable to these women from his past and to judgement, which gives the project a great deal of power.

To me, what makes this project really shine is the writing, the stories or the names that accompany every design. Those tiny tales are little slices of Errazuriz’s life, and without them, I feel the project wouldn’t have been so captivating. There’s a degree of relatability that results in an invitation to the viewer. Rather than search for meaning in every shoe, he hands it to us, neatly wrapped in colloquial regard. It’s a refreshing offering, especially in contrast to all the other art usually on exhibit; sure, the shoes look nice, but it’s the accompanying writing and pictures that deliver the charm and make this project so appealing.

There’s much more to 12 Shoes for 12 Lovers than just the shoes; I believe it could have just as easily been titled “12 Stories for 12 Lovers.” And there’s something for everyone in this offering—whether it be the fashion, the design, the tech, the writing, or the photography. If none of that, Errazuriz manages to at least captivate with something we can all relate to: love and heartbreak. Bear with my pessimism (there’s a light at the end of it), but to me, the project prompts the assumption that life generally goes badly, which in turn aids in the realization of a good relationship being unusual. Errazuriz’s offering is a message to be more appreciative of when things do go your way. People who look at you like maybe you’re magic are rare and hard to find. 🙂 So when you find one, make sure you’ll protect and take care of her/him the best you can. 🙂